Will there be enough soybeans? How demand could outpace acres
C magazine

Will there be enough soybeans? How demand could outpace acres

Will the small 2021 increase in soybean acres and shrinking U.S. stocks be enough to meet robust global demand?

On paper, it appears the United States could run out of soybeans in this crop marketing year. Best case says the U.S. soybean balance sheet is extremely tight.

Soybean stocks are at historic lows. Overall stocks are currently lower than they’ve been in the last six years. On-farm stocks of soybeans are just 38% — one of the lowest levels in 20 years.

At the same time, the U.S. has seen stronger-than-expected soybean exports over the past year, largely due to strong Chinese purchases. As of mid-April 2021, U.S. Department of Agriculture (USDA) data showed total export commitments were at 98.4% of the USDA target, with four months of the marketing year left to go. 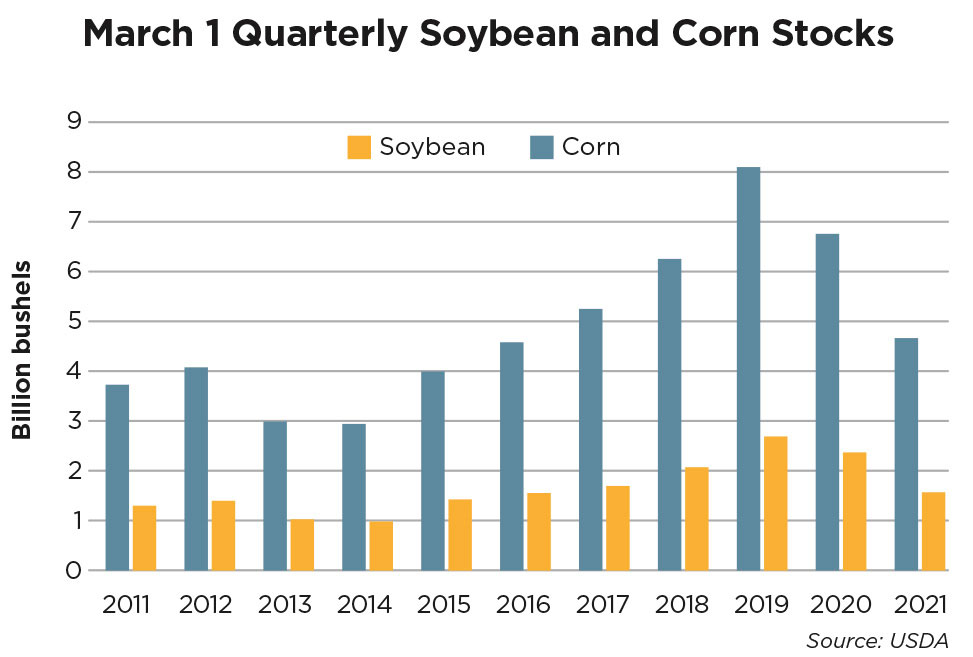 Domestically, second-quarter soybean use is up significantly from recent years and soybean crush volumes are at record highs. While USDA analysts lowered 2020–2021 soy-crushing estimates by 10 million bushels in the April World Agricultural Supply and Demand Estimates (WASDE) report, the remaining crush is still a record 2.19 billion bushels. Recent rallies in soybean oil prices have made crush margins very profitable.

Demand for soybean meal has also been on the rise, thanks in part to repopulated cattle herds in the southwestern U.S. 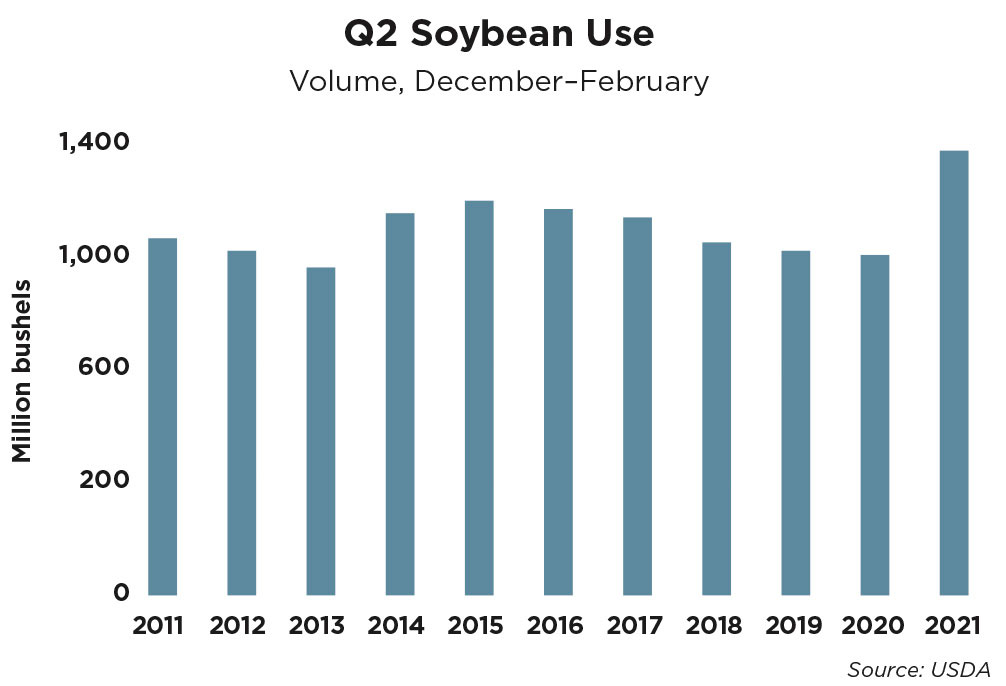 With shrinking stocks and robust demand, it would seem something’s got to give.

Logic would dictate that soybean prices would increase to attract more acres based on USDA’s meager 5.4% projected increase in planted soybean acres for 2021. It wasn’t until a few days after the Prospective Plantings report came out that the market started to respond. There were rallies in the corn, cotton and wheat markets at the same time.

Soybeans need to outpace the other crops to buy much-needed acres. All of the projected 87.6 million soybean acres — and more — are needed to support the strong demand side of the balance sheet.

No Corn Surplus, Either

USDA lowered U.S. corn stocks by 150 million bushels in its April report, taking the overall corn stocks number down to 1.352 billion bushels. That’s approaching low levels between 2011 and 2013, when ending stocks dipped under the 1.0 billion mark.

What’s different now from that three-year time period nearly a decade ago is that overall demand is stronger on nearly every front.

Higher corn exports. In recent months, U.S. corn export volumes have seen big increases, causing the USDA to raise its corn export number by 75 million bushels to 2.675 billion bushels in the April WASDE report. The biggest year-over-year demand increase has been from China, but demand has also increased from Mexico, Japan, Colombia, South Korea and Taiwan. 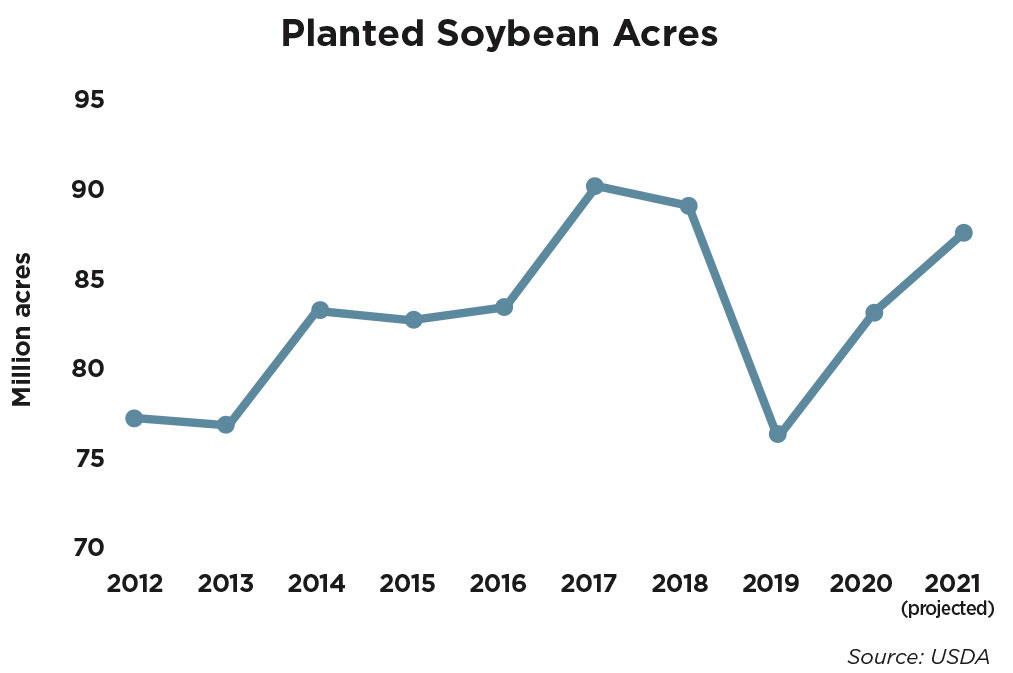 Ethanol recovery. There are signs the ethanol industry is bouncing back from the COVID-19 pandemic hit. Several ethanol plants that were idled last year restarted production this spring. In April, USDA raised its corn use rate for ethanol by 25 million bushels to 4.975 billion bushels.

Increased feed demand. The April WASDE report also showed an increase in corn demand for feed and residual use. Corn going to livestock consumption is up this year due to a record number of animals. The March 1 number of cattle and calves on feed totaled 12.0 million, the second-highest March 1 inventory since the series began in 1996.

One of the wild cards in the soybean balancing act is China, the largest buyer of U.S. soybeans. Resurgence of African swine fever in China, which devastated herds there in late 2019, would significantly drop soybean demand.

In late April, the Chinese government issued new guidelines for domestic livestock production, recommending reduced corn and soybean meal use in pig and poultry rations. We have yet to see how the Chinese ag ministry will implement and enforce this new policy, but it could have a significant impact on U.S. exports.

Contact your cooperative grain marketer for 2021 crop strategies and listen each week as CHS and industry leaders talk with radio host Mike Adams on Around the Table; find previous episodes at cooperativeownership.com.