Back to the future? Comparing today’s economy with the 1980s
C magazine

Back to the future? Comparing today’s economy with the 1980s

Today’s interest rates are still low compared to the 1970s and 1980s. That’s positive for land values and asset values in general.

For those who weathered the 1980s farm crisis — or who grew up hearing stories about farm foreclosures from older family members — the current volatility in crop prices and farm expenses, plus increasing inflation and interest rates, may bring back memories they’d rather forget.

While there are a few parallels with that difficult time in U.S. ag history, economists say financial conditions today differ from the 1980s in several key ways.

The main similarity between now and four decades ago is that federal monetary policy has played a role in rising inflation, says Michael Langemeier, associate director of the Center for Commercial Agriculture at Purdue University. “It does make you reminisce about inflation in the early 1980s,” he says. “Monetary policy has been quite loose in the last couple of years — a lot of money has been printed. That aspect is similar to what we saw in the ’80s.”

But today, monetary policy isn’t the only driver of inflation. Logistical supply chain issues related to COVID-19 have also had an impact, he says, most dramatically on fertilizer and crop protection prices — and on producers’ ability to buy those inputs.

The Purdue University/CME Group Ag Economy Barometer, a nationwide measure of the health of the U.S. agricultural economy, surveys 400 ag producers about economic sentiment each month. In the May 2022 report, 34% of producers said they’ve had difficulty sourcing crop inputs for the 2022 season, which Langemeier calls “unusual.”

“The supply chain issue is a very real part of inflation,” he says. “It’s hard to disentangle it from the effects of monetary policy, which is what makes this environment so challenging, but we have some unique sources of price changes right now that we did not see in the 1980s.”

In the early 1970s, increased farm income and high inflation caused the value of farmland to climb dramatically. By the end of that decade, the Federal Reserve Board had raised interest rates to fight inflation. Real farm income fell from $92.1 billion in 1973 to $8.2 billion in 1983, according to a report by the Federal Deposit Insurance Corporation (FDIC), and land prices began a steep decline.

Though land values are high now, too, Langemeier points out a couple of key differences compared to the high farmland values in the 1970s. Unlike in the late 1970s and 1980s, he says, today’s interest rates are still very low. That’s positive for land values and asset values in general.

“There’s not a strong correlation between land values and the stock market, so that’s attractive to nonfarm investors,” says Langemeier. “They want to hold assets that are not identical in their reactions to the U.S. and world economy.” 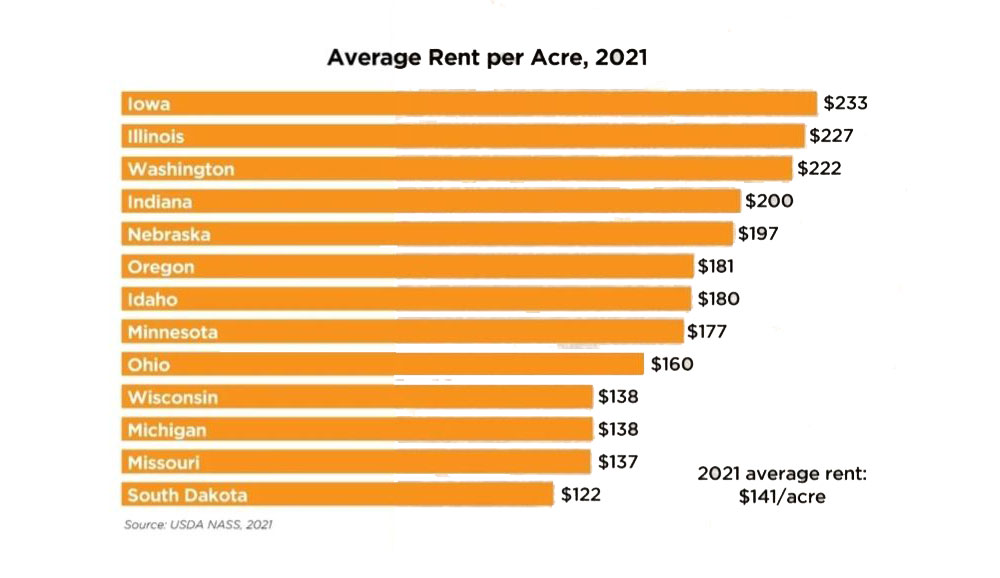 One common worry now is that inflation will lead to higher interest rates, which could lead to a recession, says Langemeier. But he points out that production agriculture can thrive even when the stock market doesn’t. In 2008, for example, when the U.S. economy was suffering from what economists called a “correction,” agriculture was doing well, he says.

“The fundamentals are very positive for agriculture right now,” he says. “We have very tight supplies, especially for corn and soybeans, in the U.S. and around the world, and that’s only made worse by the war in Ukraine. And we have high demand, especially from China and other countries in Asia. There’s certainly a chance the U.S. economy could go into a recession, but even if that happens, production agriculture may not follow.”

Check out the full Spring 2022 issue of C magazine with this article and more.